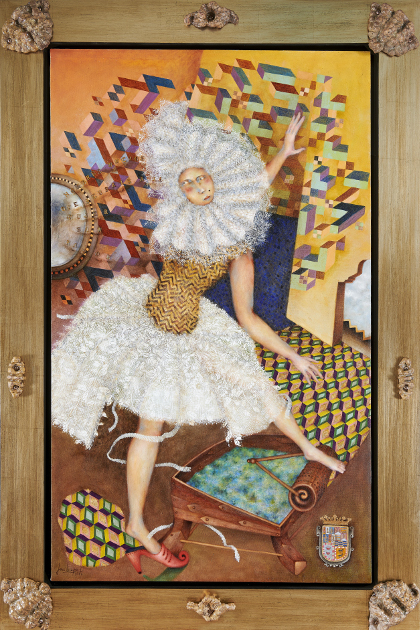 I learned that just because you can’t see any other explanation doesn’t mean that one doesn’t exist. It just means you can’t see it. Harlan Coben

“The breaking of a wave can’t explain the whole sea,” says Vladimir Nabokov, and it’s understandable that the whole sea cannot explain the breaking of that wave either. Trying to put into words the meaning of the artistic work of a lifetime is a bit like that: many waves, a lot of ocean; even many seas. It’s complicated. Many moments, stories and emotions run through me when I want to explain, a word that doesn’t mean anything other than unfold, develop, display, and that in more ways than one comes close to, “expose”, meaning, “put out there.” It is clear to me that cultural explanations and definitions are usually exceeded by the artistic production itself, because of the phenomenon that it involves – in particular that capacity or facility that, with its mysteries, we call creativity–, but we must try. All these things wander around in my head: laughter, space, transvestism, sarcasm, puns or double meanings, children’s games, visual tricks, color, and other

concepts that, among conversations, keep piling on. I see myself from the outside and I think that entering into the universe of José Bayro C. (sometimes you have to see yourself in the third person to be critical enough) is equivalent to entering a labyrinth from which it is difficult to escape. There must be a way out, but I haven’t found it myself. In conversations with friends, gallery owners, collectors, artists, critics, family members, and others, in which the intention is to deconstruct my universe to understand it, I have been compared to Bosco, which is as much a compliment as it is a great responsibility. Such a comparison is due to the fact that, like this Flemish artist, I’m an inventor of images. My creative process is compared to that of an inventor (“Tinkerer”, like Mark Jenkins of the Washington Post called me, or inventor; also architect, we could say, my first professional formation) in which I combine, I play and I relate, “As beautiful as the chance encounter of a sewing machine and an umbrella on an operating table”, as the French poet and forerunner of surrealism, Isidore Ducasse, would say. In fact, one of my main pieces, and the one which has stalked me like a ghost over the years, is El Hombre Azul (The Blue Man).

Similar to the first arcanum of the Tarot of Marseille, El Mago (The Magician), El Hombre Azul is in process: the magicians, masons, alchemists, demiurges, they work on their feet, sustained by a three-legged table-chair (Production, distribution, and consumption), which is the main support of the materials.  The whole piece is made based upon the golden ratio (Aurea section 1.618).  Therein lies the magic, and from there it moves, it takes shape, as if it were a portable workshop.   My work should be seen as a type of festival, a main concept in my occupation. Let’s remember that in the Middle Age and in the Renaissance, the carnival worked as a kind of escape valve. It was there where they could make fun of the king, when he crowned himself not the sharpest, smart, or most clever person, but more like an ugly, drunk or monstrous one. In the carnival the stupid laugh becomes intellectual, without leaving idiocy. I imagine in my work the laughter of the middle class mocking themselves (The middle class in Latin American countries is the royalty, the privileged class) and from their reprieve. I make fun of it and it makes fun of its own sexual appetite, of the transformation in non-accepted nymphomaniacs. The laughter is now from the forgotten classes, from the marginals: they don’t mock; a joke from the omitted classes by the opportunistic classes that don’t express any modesty in our towns. Another influence of mine is Creole painting, especially that of Diego Quispe Tito, a Peruvian Viceroy painter.  In his work there is a quality that today we could consider, naïf; which in English we can translate to (not without a bit of caution) as a naive style.  In him I find a use of color and perspective that, although they do not follow the canons that we call “classics”, they serve the function of deceiving the eye.  Like the trompe l’oeil of the European painters of that time. It is characterized by the representation of flora and fauna, mountain landscapes, and the lack of perspective. He invents animals: birds from an Andean bestiary or elephants with human ears, among others, all with a very Latin American language and a personal and intimate expression. Let me explain: I am from the south; my family is from Peru. In my painting, the ingenuity of color and the figures are not just produced in the image itself, it’s done by the viewer. It is a baroque mirror game: laughter bounces from person to person. I laugh at the viewer as the viewer laughs fully at me and we both laugh at the image and, in turn, the titled work laughs at us. There is something about philosophy here, of course, and also about that phrase by Blaise Pascal: “To ridicule philosophy is really to philosophize”. Thus, the game of mockery, coquetry and satire, is compared with the double meaning of the pun. It combines the insight not only of the sender but of the receiver. That is why I identify myself with Goya, in particular with Los Caprichos (The Caprices), those satirical etchings of his, with which some have a peculiar coincidence with a couple of my works. I also smile at my surrender, when I don’t know how to respond to those cunning play of phrases.